It's barely April and Riley has already survived his first Oklahoma tornado! Last night was probably one of the scariest of my life--and I've lived in Oklahoma forever.

Although it had been storming all night, around 1:30 it started hailing insanely and I had to get out of bed to see what was happening. It sounded pretty bad and not long after, our TV went out (we have satellite). I went to the back porch and could tell that things were intense. Then, my voicemail signaled and I saw my mom had called. I knew that was not a good sign. I called her back and found out that the tornado warning was in effect for us and the eye of the storm was headed our way.

We got Riley out of bed (at 2 a.m.) and headed to a closet under the stairs. I listened to my mom as she tracked the tornado for us and I started to panic--alot. Then, the electricity went out. I knew this was a bad sign and all I could think about was Riley. I cried. And cried some more. Then my dad called to check on us and once again, this freaked me out.

I held on to Kevin and Riley as tight as I could and silently prayed while my mom talked us through the reports. The fifteen minutes of the storm traveling through Edmond seemed like years. Then, my dad called back and said it had passed us. I heard the weather guys say something about I-35 and I knew we were okay.

Scared, but relieved, we got out of the closet and started lighting candles. Outside it was spooky calm and pitch black and all of our neighbors were in their yards with flashlights. Thankfully, we were untouched and the storm just missed us.

It was the closest call I've ever had and my first brush with a scary situation as a parent. It was unreal. I didn't care if I landed upside down in a tree--as long as our son was okay.

Of course now I'll be buying a weather radio and a storm shelter is on the wish list for the near future. Nightime tornados are so not cool. 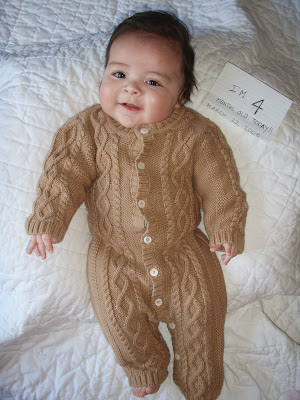 So we have a large baby, if you haven't caught on to that. The doctor says we're seeing the first signs of teething and that there are some baby teeth buds just below the surface. We are doing great on all fronts. Because he's sleeping 12 hours a night we aren't supposed to worry too much about naps for now. Guess my days won't be as productive as I hoped....

Regarding vaccines... After talking to Juli (Ph.D. in Immunology...why didn't I think of that immediately?!) and doing a TON of research, we decided that spreading out the vaccines was the way to go. I got a lot of great info from The Vaccine Book by Dr. Bob Sears that I mentioned in a previous post. It has a breakdown of each vaccine, pros/cons, and ingredient list. It was eye-opening to say the least. I slightly altered Dr. Sears' recommended alternative schedule and came up with our own.

Unfortunately, our pediatrician did not share our viewpoint on vaccines and told us today that he wouldn't do our alternate schedule. Not only that, he basically let us know that there was no point in doing it. This sucks because I really, really liked him. I did convince him to go ahead and give us only the shots that we would get had he agreed with our plan. So, instead of 6 vaccines, Riley only received 2 today and now we're set for 2 more shots at 5 months. He was a little sleepy this eve, but other than that, no effects. The kid didn't even cry when he got his shot today. Nuts!

We're on the hunt for a new pediatrician now, which is a bummer, but we feel like we made the right choice for us. I'm sure the first of many hard fights as a parent... 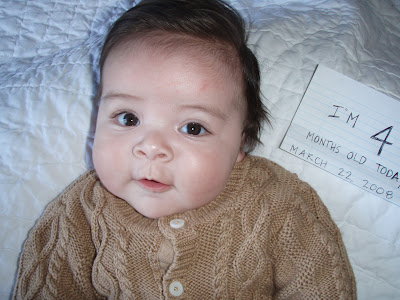 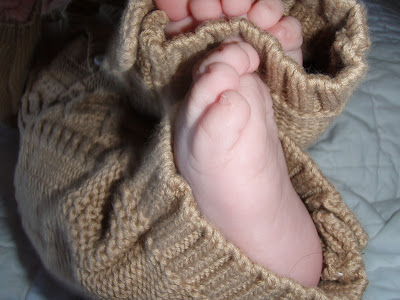 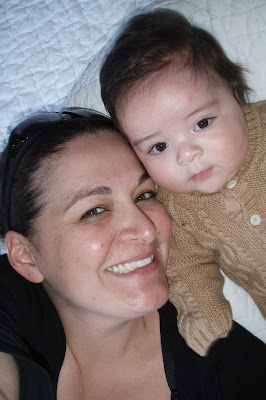 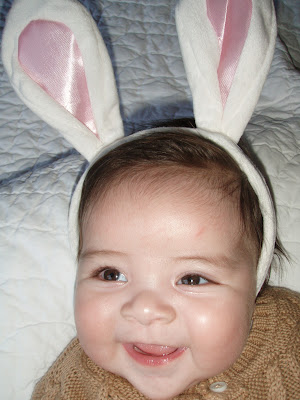 Every ski season for the last five years, Kevin and I have made our way to Pagosa Springs, CO to ski at Wolf Creek. Last week was this year's trip....and this time we invited along some of my family. Riley did great on the drive, although we made lots of stops to give him time to stretch and play. The trip was so fun and we learned that Riley loves hats and sunglasses--he really is our kid. I can't wait until next year!!

Here are a few pics from the trip: 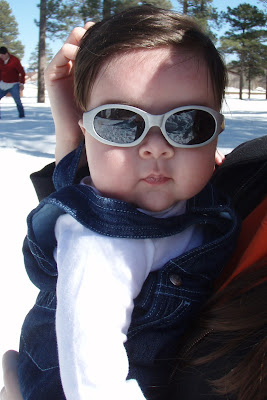 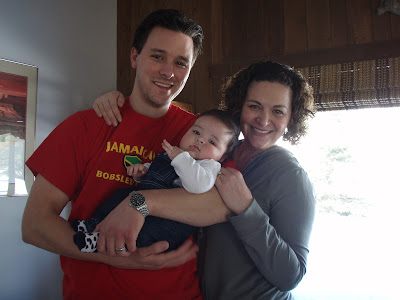 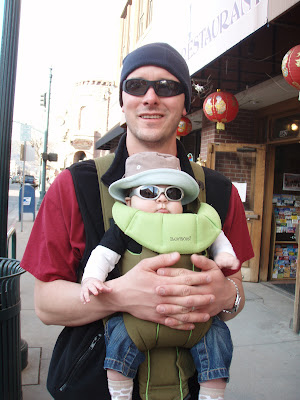 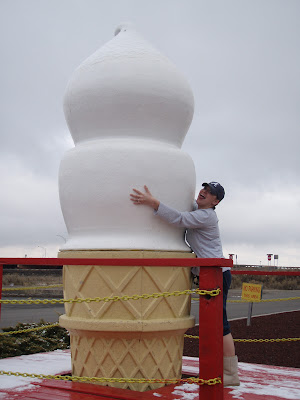 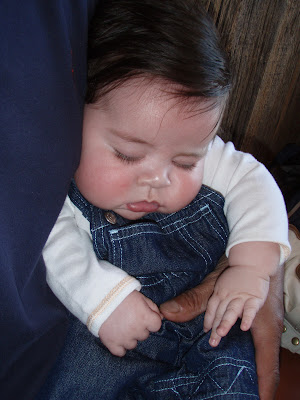 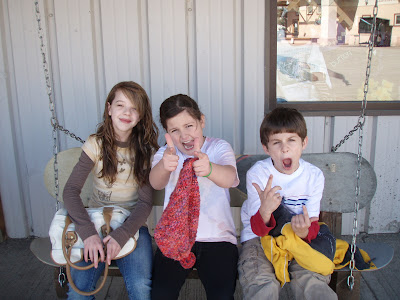 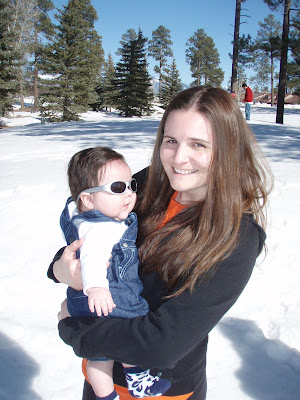 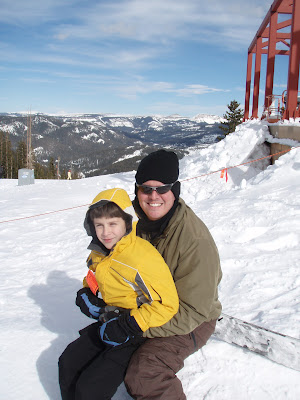 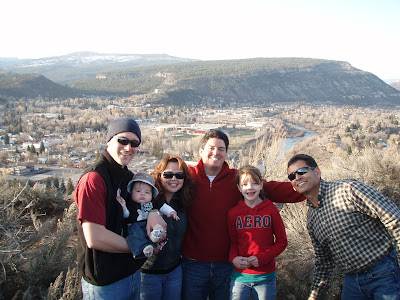 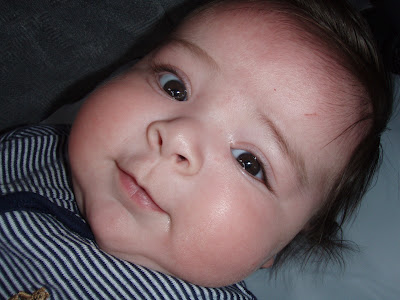 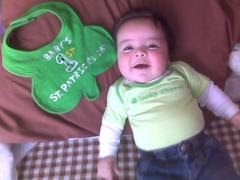 Sent via BlackBerry by AT&T

Riley will be headed in for his 4-month appointment soon and all I can think about is the next round of his vaccinations. We had his 2-month vaccinations without even a second thought, mostly because I didn't know there was a thought to give. However, the talk about vaccinations seems to be all around me, and although it's probably because it's on my mind that I'm noticing the buzz, I can't help but think I should listen to what's being said.

I know vaccinations are a positive thing and have kept many a child alive and well. However, there are a lot of people who say a lot of things about the negatives of these chemicals that we are pumping into very tiny babies. Much has been said about the levels of mercury and aluminum and even more has been said about the heavy doses of vaccines that our babies are receiving at one time. I don't want to be alarmist, but I don't want to be hasty. It seems silly to blindly do it just because every other parent does.

So... I have about a week and a half to figure out my answer. I've been reading a lot about an alternative vaccination schedule developed by Dr. Robert Sears and written about in The Vaccine Book. It isn't an anti-vaccine approach, but rather anti- "all the vaccines at once." Instead, spreading them out a little bit more over a number of doc visits. More co-pays, more shots and saddness, but less chemicals at once.

This might be my compromise. I'm going to spend the next week-and-a-half researching pros and cons of recommended vaccines and hopefully my pediatrician will be receptive to my decision. Maybe it's not a big deal at all, but I think we owe it to our son to at least do a little digging on the subject.

Here's hoping I make the right decision.... If you have any insight, please pass it my way!

The weather has been GLORIOUS this week. Seriously, no other way to put it. Yesterday, Riley spent some time with Grandpa Andy and the two took a lovely spring stroller ride! When Kevin and I returned to pick him up, we came around the corner and saw them sitting on the wall together. How many humpty dumpty references does this inspire? What a belly on this child!! 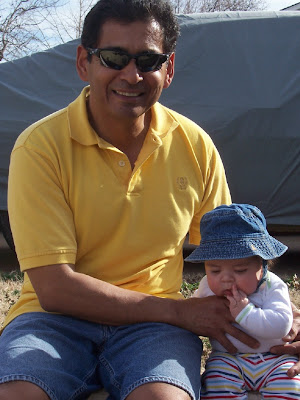 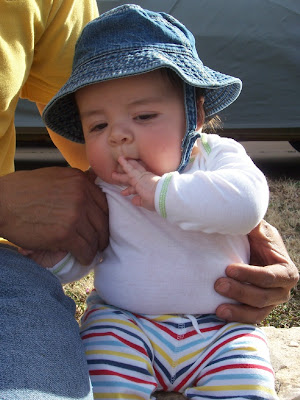 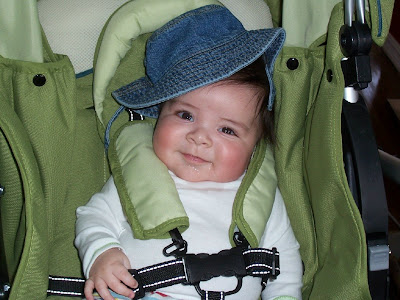 It seems Riley is super ticklish! Here's a quick clip of him cracking up while I'm changing his shirt. 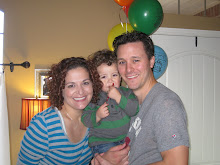 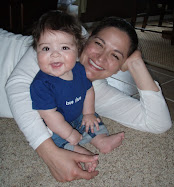 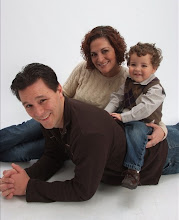 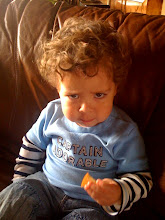